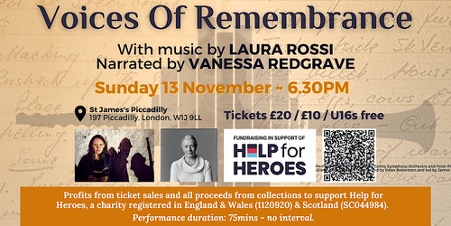 Laura’s music will be performed by Ealing Symphony Orchestra and Fever Pitch Choir (Dir. Elinor Corp), conducted by Peter Robertson and led by James Sandalls. Actress Vanessa Redgrave will be performing the readings at the concert.

Voices of Remembrance is an orchestral/choral work inspired by 10 of the most famous poems of WWI, featuring moving, expressive readings by Vanessa Redgrave & Ralph Fiennes. During her research for the score for The Battle of the Somme for the Imperial War Museum, Laura discovered that her Great Uncle Fred (pictured on the cover of the album) was a stretcher-bearer attached to the 29th Division who featured in the film. Drawing on these experiences and extensive research on WWI, Laura has created a richly evocative work that combines stunningly beautiful music with these historically important poems.