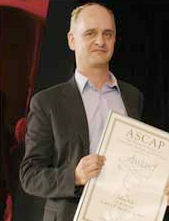 Julian will be forever associated with his ‘cracking’ music composed for those unique and loveable characters Wallace & Gromit. How many times in a decade does a composer manage to capture with such musical and dramatic power the real essence and humour of the on screen characters and story? Along with Nick Park’s clay-mation characters, Julian’s memorable music has been stamped on the nation’s soul forever. Wallace, Gromit, Aardman and Julian may now be working in Hollywood but they all remain faithful to their British roots and continue to “work” in all areas of the industry, from film and television to commercials.

Uniquely British, an original thinker, with an extraordinary ability to think outside the box, and to understand and capture the very essence of drama and character, combined with a wonderful gift for melody… all phrases that could be used to describe Julian’s talent. Having studied politics and economics at Oxford University and studied at the bar, Julian has had a varied career: investment banking, documentary producer, film director. However, he found his niche as a composer.

“But surprisingly, the Wallace and Gromit music is not his best work. Nott’s forte is the deep, powerful, emotional, even tragic cues he has written for his other features. If the music for A Respectable Trade is anything to go by, then there is no doubt in my mind that the name Julian Nott will be gracing the opening titles of movies on many a cinema screen for years to come. I find Nott’s music to be simply beautiful. So I’m telling you now – watch out world.” Jonathan Broxton – Movie Music UK.

Julian is now one of the busiest composers working in film and television today and his credits range from the Oscar winning Wallace Gromit: Curse of the Wererabbit to the serial killer thriller Death in Holy Orders. Julian scored Marcel Sarmiento’s Heavy Petting, set in New York, the controversial Mentorn satire, Confessions Of A Diary Secretary for ITV, which charted John Prescott’s time as Deputy Prime Minister, and the BBC’s adaptation of Flora Thompson’s autobiographical novel Lark Rise To Candleford. He also scored the short feature for Aardman/BBC, Wallace and Gromit: A Matter of Loaf and Death, which aired as a Christmas special on BBC 1, and for which he won the Ivor Novello Award for Best TV Soundtrack 2009. Julian scored the one-off drama, Ingenious, for CBBC/Lime Pictures , and in 2011 completed scoring the Isle Of Man Feature, The Decoy Bride for director Sheree Folkson.

Julian’s most recent projects include the CBeebies animated children’s series, Bing, and BBC’s The Incredible Adventures of Professor Branestawm, directed by Sandy Johnson

2006: Early Day Motion in House of Commons congratulating Julianon his success with Wallace and Gromit: Curse of the Wererabbit

2000: Retrospective of Julian’s film music at the Castelli Animati Film Festival in Italy.

2002: Commissioned by Arts Council of Great Britain to compose a piece of music for World famous Brodsky String Quartet.