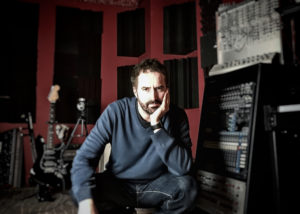 “I like expressing ideas and emotion through music in the simplest of terms. For me, music need not be a demonstration of virtuosity or a mere means of parading the newest technological tools, but more for the purpose of carrying – transparently – an essential message to the listener.” – James Hannigan, BAFTA’s ‘Conversations with Composers’ at the Royal Albert Hall.

James Hannigan is a British Academy Award-winning composer profoundly focused on the emotional directness and personal nature of his music, with a long list of credits including entries in the Harry Potter, The Lord of the Rings, Dead Space, EA Sports, Evil Genius, Discworld and Command & Conquer series’. He is also co-founder of sell-out Southbank conference, Game Music Connect, and founder of new London-based event series, Screen Music Connect.

Even given his foray into the exuberant and often florid musical universes of popular fantasy and science fiction franchises, Hannigan’s music succeeds in transcending the stylistic expectations and constraints of genre, delivering a compelling and recognisable voice all of its own – from the minimal and quirky to the downright ‘epic’.

Hannigan’s work for TV and Radio includes BBC America’s Primeval, the award-winning BBC adaptation of Neverwhere and Good Omens, Audible’s Alien trilogy and Unseen Academicals – and his music is heard regularly all over the world in countless shows and trailers.

James Hannigan has recorded with several world-class orchestras during his career so far – ranging from The Philharmonia Orchestra, The Chamber Orchestra Of London to the The Skywalker Symphony Orchestra and Slovak Symphony Orchestra –  at locations such as Air-Lyndhurst, Abbey Road Studios and Skywalker Ranch.  An audio enthusiast with an arsenal of vintage synthesizers, processors and sound manipulation tools at his disposal, James considers himself a sound designer as well as a composer, taking a profound interest in the interplay between sound and music in everything he does. Films featuring James’s sound design include New Line Cinema’s Lost in Space.

An interviewee and/or contributor for BBC Radio, Classic FM, Bafta Guru, BEEP and many others, Hannigan has had his music performed in global concerts by Video Games Live, The Eminence Symphony Orchestra, The Royal Philharmonic Concert Orchestra, The Philharmonia and other ensembles, and he is co-founder of several talk-based events – which have variously been supported by Sony, Electronic Arts, BAFTA, Classic FM, BASCA, PRS For Music, COOL Music and others.